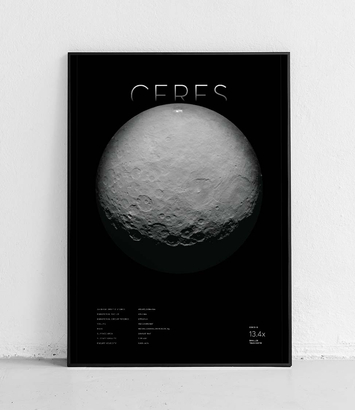 Ceres- Planets of the Solar System v2 - poster
Paper:Smooth matte
Size:50 x 70 cm
uniwersalny
Posters from the Astronomy series show all eight planets in the solar system and 5 dwarf planets in the solar system. They were made, especially at our request, by the artist from Krakow as a second series, showing the same planets in a different, original perspective. This poster shows Ceres, a dwarf planet in the solar system. A dwarf planet orbiting within the asteroid belt between the orbits of Mars and Jupiter. It has a diameter of 950 km and is the largest of the bodies circulating within this belt. It was discovered on January 1, 1801 by the Italian astronomer Giuseppe Piazzi. Initially, it was referred to as a planet, after several decades it began to be referred to as an asteroid. In August 2006, the termdwarf planetwas introduced and Ceres was included in this group of objects.
Ask for this product
Write your opinion