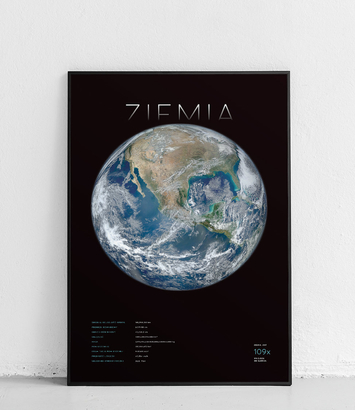 Earth - Planets of the Solar System v2 - poster
Paper:Smooth matte
Size:50 x 70 cm
uniwersalny
Posters from the Astronomy series show all eight planets in the solar system and 5 dwarf planets in the solar system. They were made, especially at our request, by the artist from Krakow as a second series, showing the same planets in a different, original perspective. This poster shows the Earth. It is the fifth largest planet in the solar system - it is the only known place in the universe where life occurs. The surface temperature ranges from -70 ° C to 80 ° C. In December, the Earth is slightly closer to the Sun, and in June it is farthest from it. The Earth's axis is tilted with respect to the sun, so we have seasons. The rotation of the Earth around its axis causes the phenomena of day and night. The Earth's atmosphere is composed mainly of nitrogen and oxygen, is about 100 km thick and consists of several layers. One of the most important is the ozone layer, which stretches at an altitude of about 20-35 km and acts as a shield protecting us against harmful radiation.
Ask for this product
Write your opinion