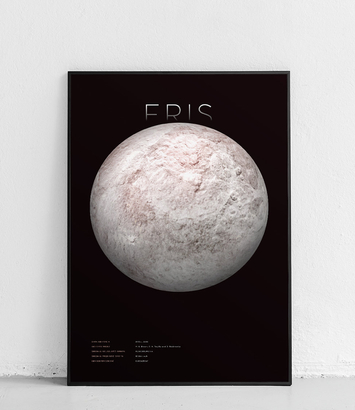 Eris - Planets of the Solar System v2 - poster
Paper:Smooth matte
Size:50 x 70 cm
uniwersalny
Posters from the Astronomy series show all eight planets in the solar system and 5 dwarf planets in the solar system. They were made, especially at our request, by the artist from Krakow as a second series, showing the same planets in a different, original perspective. This poster shows Eris, a dwarf planet in the solar system.Eris was discovered on January 5, 2005 in photos taken on October 21, 2003. The discovery of this object was announced on July 29, 2005. The discoverers gave it the unofficial name "Xena". On September 13, 2006, she was given the permanent name of Eris, after the Greek goddess of discord. (136199) Eris is a trans-Neptunian object, the mass of which shortly after its discovery was estimated to be greater than that of Pluto, and for this reason it was called the tenth planet in the media. However, on August 24, 2006, it was decided that Eris, like Pluto and Ceres, would be included in a new class of objects - dwarf planets.
Ask for this product
Write your opinion