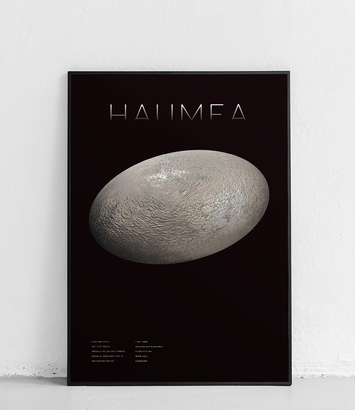 Haumea - Planets of the Solar System v2 - poster
Paper:Smooth matte
Size:50 x 70 cm
uniwersalny
Posters from the Astronomy series show all eight planets in the solar system and 5 dwarf planets in the solar system. They were made, especially at our request, by the artist from Krakow as a second series, showing the same planets in a different, original perspective. This poster shows Haumea, a dwarf planet in the solar system. 17 September 2008, the International Astronomical Union classified as a dwarf planet Haumea and gave it its current name. It is named after Haumea, goddess of fertility and childbirth in Hawaiian mythology. Previously, it had the temporary designation 2003 EL61, and also used the unofficial name - "Santa" (Santa Claus).
Ask for this product
Write your opinion