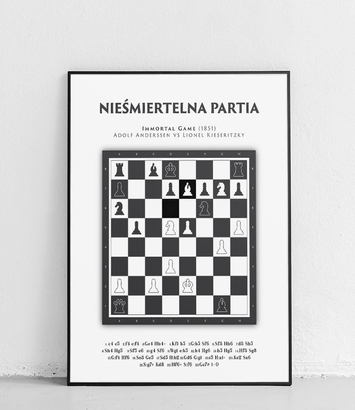 Immortal party - poster
Paper:Smooth matte
Size:50 x 70 cm
uniwersalny
Poster "immortal game" (Immortal Game) played between Adolf Anderssen and Lionel Kieseritzkim. This game is one of the most famous games in the history of chess! Played in 1851 as an informal duel between two European professors of mathematics, this game became the showpiece of classic 19th century chess, when amazing attacks and casualties were the order of the day. Adolf Anderssen was one of the strongest players of his time and was regarded by many as world champion after winning the London tournament in 1851. Lionel Kieseritzki lived in France for most of his life. There he gave lessons and played games of five francs an hour at the famous French Café de la Regence. Kieseritzki was well known for being able to beat a lower-ranked opponent despite giving him a head start - by playing without the queen, for example. The game played between two great players at London's Simpson's-in-the-Strand Divan, known as the "immortal game", actually took place during a break in the tournament. Kieseritzki was very impressed when it was over and telegraphed the game record to his chess club in Paris. The French chess journal La Regence published it in July 1851. In this beautiful game, white sacrificed the queen, two rooks, a bishop and a pawn, in order to make a beautiful checkmate with light figures after 23 moves.
Ask for this product
Write your opinion