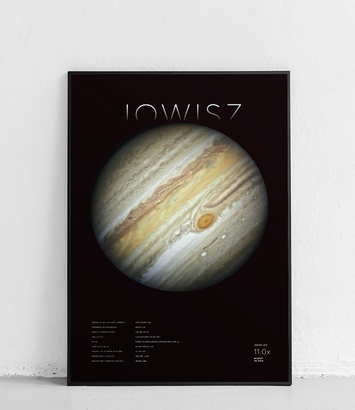 Jupiter - Planets of the Solar System v2 - poster
Paper:Smooth matte
Size:50 x 70 cm
uniwersalny
Posters from the Astronomy series show all eight planets in the solar system and 5 dwarf planets in the solar system. They were made, especially at our request, by the artist from Krakow as a second series, showing the same planets in a different, original perspective. This poster shows Jupiter. Known as the Great Red Spot, it consists of hydrogen and helium. Jupiter is the first of the four great planets - the gas giants and also the largest planet in the solar system. It is a gas ball, although it probably has a liquid rock core. Jupiter bulges at the equator and flattens at the poles due to large swirls. Winds on it reach speeds of up to 500 km / h. Rapid swirling and heat from the inside of the planet create strong winds, dividing the atmosphere into latitudinal belts of ascending or descending gases. Jupiter also shows a cyclone twice the diameter of Earth.
Ask for this product
Write your opinion