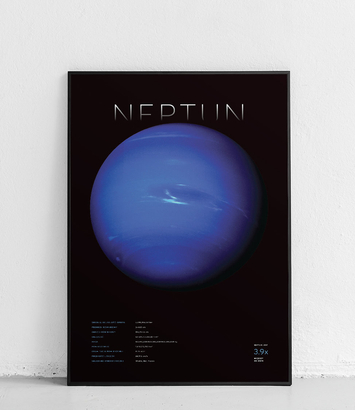 Neptune - Planets of the Solar System v2 - poster
Paper:Smooth matte
Size:50 x 70 cm
uniwersalny
Posters from the Astronomy series show all eight planets in the solar system and 5 dwarf planets in the solar system. They were made, especially at our request, by the artist from Krakow as a second series, showing the same planets in a different, original perspective. This poster shows Neptune. Neptune is the most distant and smallest gas planet. Neptune's core makes up about 50% of its volume and is made up of rock and ice. They are surrounded by ammonia and methane, which gives them a blue color. The speed of winds is up to 2.5 thousand. km / h. There are also storms in the form of a large dark spot. Geysers have also been discovered on one of Neptune's moons, the icy Triton. Voyager 2 confirmed earlier assumptions about the existence of rings around Neptune. Due to its interactions with satellites, Neptune's magnetosphere has a variable geometry.
Ask for this product
Write your opinion