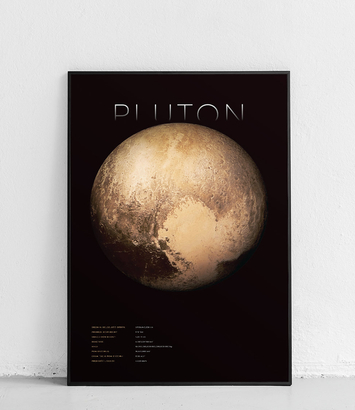 Pluto - Planets of the Solar System v2 - poster
Paper:Smooth matte
Size:50 x 70 cm
uniwersalny
Posters from the Astronomy series show all eight planets in the solar system and 5 dwarf planets in the solar system. They were made, especially at our request, by the artist from Krakow as a second series, showing the same planets in a different, original perspective. This poster shows Pluto, a dwarf planet in the solar system. It is the brightest object the Kuipe Beltra. It was discovered in 1930 by the American astronomer Clyde Tombaugh. From its discovery to 2006, Pluto was officially recognized as the ninth planet of the solar system. On August 24, 2006, the International Astronomical Union deprived Pluto of planetary status, which means that the Solar System has 8 planets. Pluto belongs to a wider group of trans-Neptunian objects. The plane on which it moves is heavily tilted to the plane of the ecliptic, with a highly eccentric orbit that is partly closer to the Sun than Neptune's. Pluto circulates at least five satellites, one of which, Charon, has only about half the diameter of its.
Ask for this product
Write your opinion