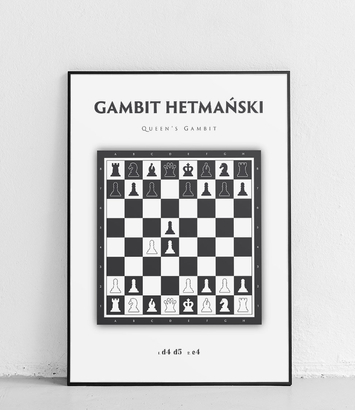 Queen's Gambit - poster
Paper:Smooth matte
Size:50 x 70 cm
uniwersalny
A poster from "Hetman's Gambit". It is one of the most frequently chosen debuts in the group of closed debuts. It is created after moves:White sacrifices a piece in return for taking control of the center of the board. Black can accept or reject the sacrifice. The first mentions of the queen's gambit can be found already in 1497 at Luis Lucena. This debut gained great popularity at the end of the 19th century, thanks to the successes of Johannes Zukertort in London in 1883 and Harry Pillsbury in Hastings in 1885. Wilhelm Steinitz, Siegbert Tarrasch and Akiba Rubinstein made the greatest contribution to the development of the Hetman gambit theory. The hetman gambit's popularity peaked in the 1920s and 1930s, but even today it is eagerly used by the world's strongest grandmasters.
Ask for this product
Write your opinion