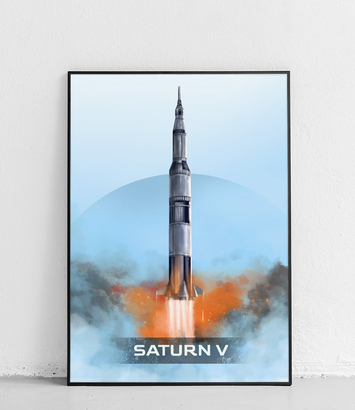 Saturn V
Paper:Smooth matte
Size:50 x 70 cm
uniwersalny
A poster with a super-heavy space rocket, Saturn V from the "Technical Wonders" series. The series presents the greatest technological achievements of the 20th and 21st centuries. The main reason for the construction of the Saturn V rocket was the Apollo program, the purpose of which was to land people on the moon (carried out by the Apollo 11 mission). It was the largest of the Saturn family's rockets. It was designed by a team led by Wernher von Braun and Arthur Rudolph at the Marshall Space Flight Center with the participation of Boeing, North American Aviation, Douglas Aircraft Company and IBM. Saturn V was more than 2 times larger than the Saturn I and Saturn IB rockets. It was 111 meters high. It is almost 18 meters more than the Statue of Liberty. The Warsaw Palace of Culture is just over 180 meters, for comparison. The weight of the rocket, when full, was 2.8 million kilograms. Saturn V was able to deliver as much as 130 tons to the Earth's orbit and deliver 50 tons to the Moon. Saturn B consisted of 3 million parts. When he competed, he produced enough energy to power all of New York City for 75 minutes.
Ask for this product
Write your opinion