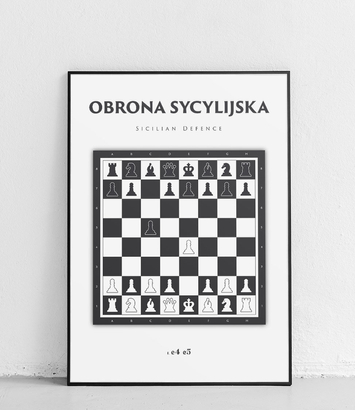 Sicilian Defense - poster
Paper:Smooth matte
Size:50 x 70 cm
uniwersalny
A poster with "Defense of Sicily". It is a chess opening characterized by moves:It is a semi-open debut. In the classification of chess openings encyclopedia it is marked with ECO codes B20 – B99. This debut is the most popular and giving the best results answer to the first move of white 1.e4. 1.d4. is statistically more effective for white as the Sicilian Defense has a high success rate before 1.e4. The magazine "New In Chess" in its 2000 yearbook stated that in games from its database, white won 56.1% of games from 296,200 starting from 1.d4, and starting from 1.e4 it was 54.1% in 349 855 games, mainly thanks to the Sicilian defense (52.3% won by White out of 145 996 games).
Ask for this product
Write your opinion