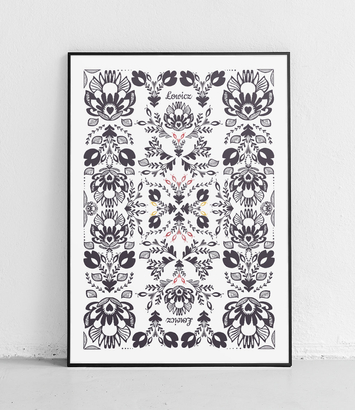 The folk pattern from Lowicz - black and white
Paper:Smooth matte
Size:50 x 70 cm
uniwersalny
The poster from the "Folk Costumes" series presents Polish folk costumes from various ethnographic groups. We wanted to show a part of our native tradition, Polish folklore in a different, perverse and modern way. That is why we decided to show the folk clothes in the form of a deck of cards. One card is for a woman and a man in traditional clothing from a given ethnographic group, the other for the back of the card, which shows the main design motifs from a given region.
This poster shows a hunting outfit, also known as a priestly costume, which is the outfit of people living in the fertile lands of Mazovia in the valley of the Bzura River and its numerous tributaries. The Łowicz garment is one of the richest and most spectacular costumes not only of Mazovia, but of the whole of Poland, worn and used also today.
This poster, as well as the entire series, was made especially for us by the artist from Poznań, Kasia Nowakowska.
Ask for this product
Write your opinion