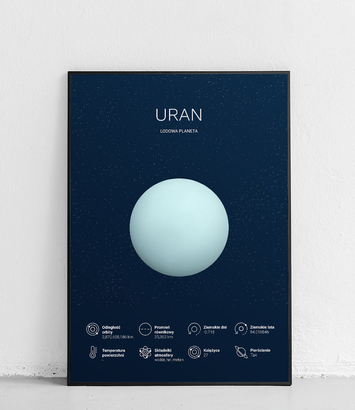 Uranus - planets of the solar system - poster
Paper:Smooth matte
Size:50 x 70 cm
uniwersalny
Posters from the Astronomy series depict all eight planets of the solar system. They were made especially for us by the artist from Wrocław. This poster shows Uranus, the seventh planet from the Sun, and the third gas giant after Jupiter and Saturn. It was discovered on March 13, 1781 by William Herschel - astronomer, constructor of telescopes and composer, known for many astronomical discoveries, including the planet Uranus. The planet is named after Uranus, the god and personification of heaven in Greek mythology.
Ask for this product
Write your opinion