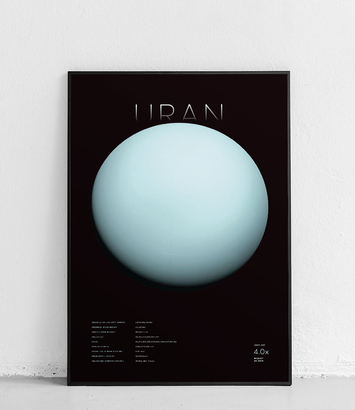 Uranus - Planets of the Solar System v2 - poster
Paper:Smooth matte
Size:50 x 70 cm
uniwersalny
Posters from the Astronomy series show all eight planets in the solar system and 5 dwarf planets in the solar system. They were made, especially at our request, by the artist from Krakow as a second series, showing the same planets in a different, original perspective. This poster shows Uranus. Uranus takes its name from the god of Greek mythology, Uranus. He was the ruler of the heavens, the first of the gods. This planet is spinning backwards on its axis. Its magnetic field is 3 times stronger than on our planet. Uranus's 11 rings are very fuzzy and hard to see from Earth. However, they are stronger than Jupiter's rings. Uranus owes its greenish color to methane clouds in the upper atmosphere. The temperature differences are not large and range from -208 ° C to -212 ° C. Uranium stands out among the gaseous giant in that it has no rock core. Its upper atmosphere consists mainly of hydrogen and helium, and its lower layers form methane clouds. Methane absorbs red light, which is why Uranus is green blue when viewed from space.
Ask for this product
Write your opinion