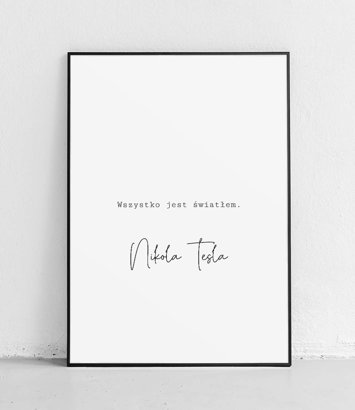 Velociraptor - poster
Paper:Smooth matte
Size:50 x 70 cm
uniwersalny
"Dinosaurs for children" posters were created to promote knowledge about dinosaurs among children by showing different species of dinosaurs in an interesting and fun way.

Velociraptor is a genus of small theropods of the Dromaeosauridae family. It was a bipedal predator inhabiting what is now Mongolia at the end of the Cretaceous 83 to 70 million years ago.

Velociraptor was not a large dinosaur. It was only 100 cm tall, approx. 170 cm long and 20 kg in weight. Despite its small size, it was a formidable hunter. The skull of the Velociraptor was armed with sharp teeth. The Velociraptor's hand was long and armed with three sharp claws. In terms of flexibility, the Velociraptor's hand resembled the arms of his close relatives - the birds. Velociraptor's feet were three-toed. Each of them had a sickle-shaped claw, measuring about 12 cm. Most likely, it was used to deal a fatal blow to the victim. The velociraptor's tail had a distinctive structure. Some of the appendages and supports of the tail vertebrae were extraordinarily elongated, which ensured balance when running fast, especially during sharp turns. Dromeosaurs have many skeletal features in common with birds, and like older dromeosaurs such as SinornithosaurusandMicroraptor, it had feathers. This poster, as well as the entire series, was made especially for us by the artist Martyna Nejman.
Ask for this product
Write your opinion