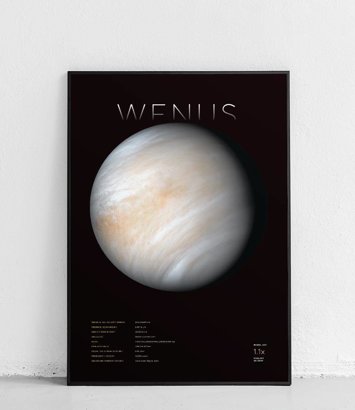 Venus - Planets of the Solar System v2 - poster
Paper:Smooth matte
Size:50 x 70 cm
uniwersalny
Posters from the Astronomy series show all eight planets in the solar system and 5 dwarf planets in the solar system. They were made, especially at our request, by the artist from Krakow as a second series, showing the same planets in a different, original perspective. This poster shows Venus. She is the second planet in the solar system. It is surrounded by clouds of poisonous gases. It is very bright because its dense clouds reflect light very well. The maximum temperature on Venus is + 482 ° C. This planet is spinning in the opposite direction to its orbit, it is the so-called "reverse rotation". The first probe to land on Venus was destroyed in about an hour by its high temperature and pressure. In 1978, the American space probe "Pioneer-Venus" became an artificial satellite of this planet. Thanks to it, extensive flat plains with craters, valleys and mountain ranges, as well as volcanoes were discovered on its surface.
Ask for this product
Write your opinion