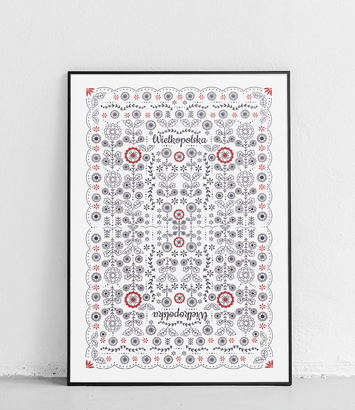 Wielkopolska folk pattern - red
Paper:Smooth matte
Size:50 x 70 cm
uniwersalny
poster from the "Folk Costumes" series shows Polish folk costumes from various ethnographic groups. We wanted to show a part of our native tradition, Polish folklore in a different, perverse and modern way. That is why we decided to show the folk clothes in the form of a deck of cards. One card is for a woman and a man in traditional clothing from a given ethnographic group, the other for the back of the card, which shows the main design motifs from a given region.
This poster shows the pattern of the Wielkopolska folk pattern, characteristic of the Szamotuły folklore, which is one of the varieties of folk costumes once worn in Wielkopolska. Its range included the Szamotuły Land, which in its time was the most densely populated area of historical Wielkopolska. The Szamotuły costume developed at the beginning of the 19th century and already then it became a distinguishing feature and a representative garment. Compared to other parts of Wielkopolska in the Szamotuły region, the folk costume was especially durable, as it was also worn in the interwar period - at a time when it was forgotten in other villages of Wielkopolska.
This poster, as well as the whole the series was made especially for us by the artist from Poznań, Kasia Nowakowska.
Ask for this product
Write your opinion